There and Back Again: An Emerging Artist Goes South

It’s been a very long time since my last blog post and for those that had followed my blogs in the past I apologize for the passage of time . No, I did not fall of the edge of the earth. But recently, a number of things have happened in my musical life that I felt were worth sharing with you all.

How it All Started

In November of 2017, I attended NERFA (the North Eastern Regional Folk Alliance Conference) in Stamford, Connecticut and had the opportunity to appear in a number of guerilla showcases. As anyone who has spent any time with me when I’m not busy with other matters, I am a habitual “noodler” on the guitar. If, as the old saying goes, that “idle hands are the devil’s workshop”, then Old Nick would have no interest in me whatsoever. To this end, when I was making the rounds at NERFA, my old friend Alan Rowoth and his crew were setting up their cameras so that they could “live stream” on Facebook and needed someone to point their cameras and mics at so that they could do a detailed video and sound check. So, I just set myself down and began playing as happy as you please, unaware that they were actually recording me and uploading the video.
As it happened, another friend of Alan’s, Diane Perry from New Jersey, was looking through her Facebook feed and caught sight of my errant improvisation without a care in the world. Diane, a Juilliard-trained violinist, vocalist and jazz artist had an opening for a guitarist. Diane then called me and asked if I would review her music and see if I would be able to learn her music sufficient to be able to perform the same before an audience (the first major performance would be before her home crowd in less than 60 days). So I listened to her music. Some of it was original others were arrangements of Great American Songbook standards.
And they were excellent but very complicated (highly chromatic) pieces of music. But I like a musical challenge and this was definitely a challenge. And Diane was willing to “share the stage” so that she would accompany me on my music so that it would be closer to a “co-bill” rather than me being strictly an “accompanist”. But for me the real issue was the fact that until that point in time I was predominantly a solo artist; Playing as a duo would mean rapidly developing skills that I generally only used in a recording studio of tempo maintenance (rather than playing rubato) and playing only a portion of the orchestration of a song (such as only the bass line of a “funk” tune) and playing much slower than I would ordinarily play a tune if I were arranging it myself. But I am nothing if not willing to extend myself into an area never tried before.
So, I agreed and we began “practicing” with each other via FaceTime and in person over the following weeks.

Practicing with my new musical partner was difficult for me mostly because Diane and I come from completely opposite musical traditions. As a Juilliard-trained musician, Diane comes from a predominantly “sight-trained” tradition that emphasizes following a melody line in standard musical notation. I was predominantly “ear-trained” listening for and “deconstructing” a song’s harmonic musical and chordal structure then “reconstructing” it for guitar (using the alternate voicing used in a DADGAD tuning).
Also, the investment of time “practicing” became an issue as well. As a primarily classical, sight-trained musician, Diane was well-used to spending multiple hours at a time going over music in almost painful detail, including chordal harmony, rhythm, tempo, and dynamics. I am much more used to learning a songs chordal structure or arrangement before moving on to other aspects of a specific tune. And Diane is willing to “practice” for hours at a time whereas I “practice” intermittently at best. Also, I tend to take some level of “musical license” while maintaining the basic integrity of the song as written when arranging a song I haven’t written myself. So the differences in our musical backgrounds and practice habits, preparing for the tour was a GREAT deal of work.

Opening Night at the Minstrel Stage in Morristown, New Jersey

After nearly two months of “practice”, the date of the first gig with Diane approached at her “home venue”, the Folk Project’s Minstrel Stage in Morristown, NJ. For me, I looked forward to actually performing. When you perform, you are required to let go of your internal expectations and “go with the flow”. This worked out well for Diane and I since there was no stopping to make corrections. And it was truly excellent, indeed! More than that our interactions on stage were fluid and maintained audience interest and attention. The time just flowed by on stage and a great time was had by all. Oh, yes and money was made as well! 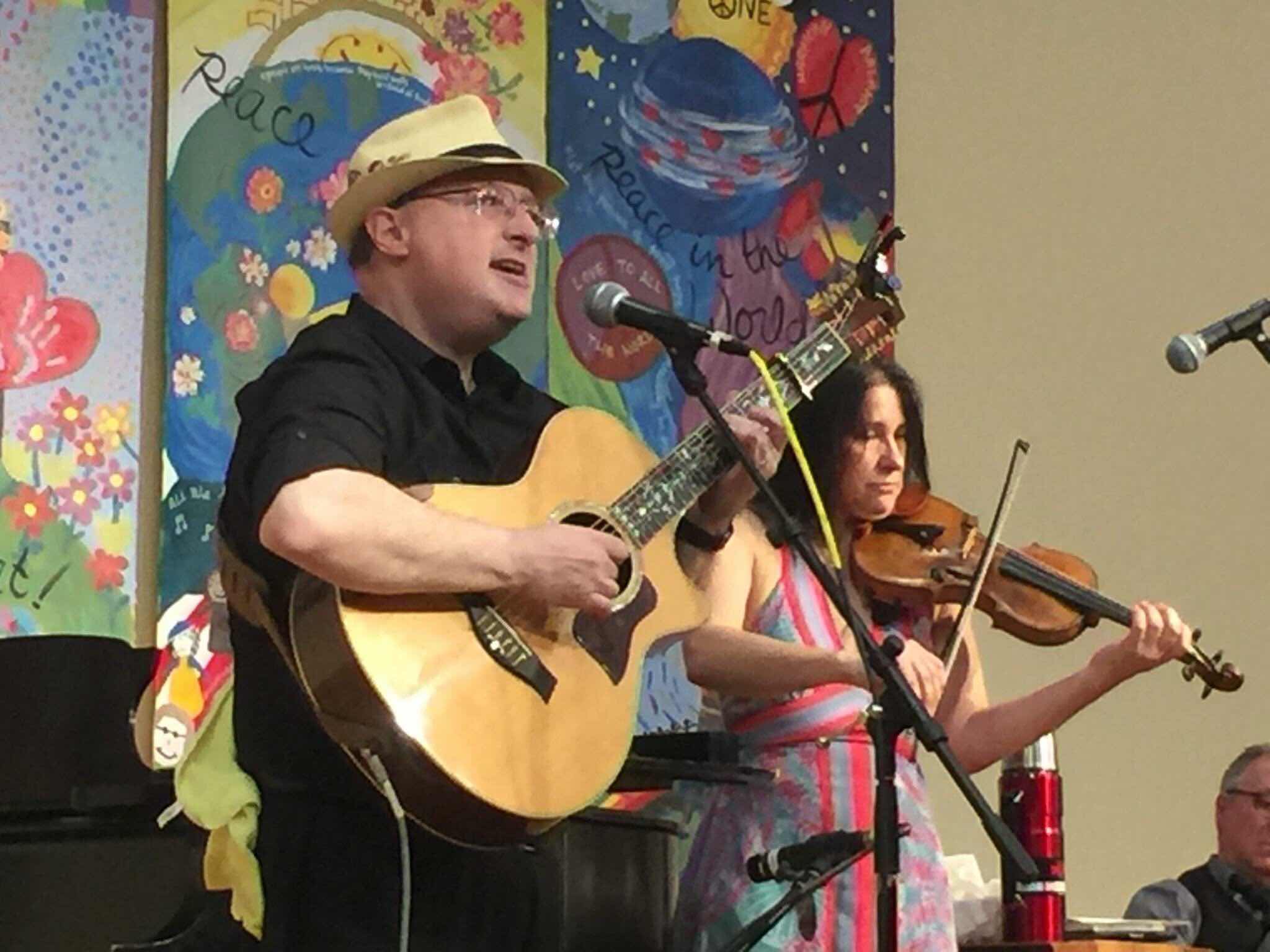 You really don’t know a person until you travel with them in a confined space. Diane and I had good discussions while we drove south but it was tiring and, occasionally, confusing as to direction. Anyway, we made our way south after performing at a nursing home in New Jersey to a waypoint in Raleigh, North Carolina. Rather than spending money on hotels, Diane was able to get us lodgings at private residences of friends and venue hosts. We drove on to just south of Asheville, North Carolina to give a house concert. We expected 8-10 people; We got between 20-30 people! Who knew?! A video of part of the House concert is below:


From just south of Asheville, NC, we drove down to LaGrange, Georgia, about and hour south-southwest of Atlanta for the “anchor” of our tour at the Pure Life Studio. I must say that this venue was one of the best I’ve ever visited, beside having a true “Green Room”, the walls from floor to ceiling of the main hall were covered with acoustic guitars of every kind and description, with the names and signatures of those that had performed their previously. As a fingerstyle guitarist, I could not have felt more welcome and “at home”. The sound check went like clockwork, with an excellent sound system. Diane and I greeted approximately a hundred guests in the main hall and we spent the next two plus hours enjoying ourselves performing. A video of my cover of Livingston Taylor’s tune, “I Must Be Doing Something Right”  at the Pure Life Studio is below:


It was simply a joyful experience for everyone involved. And I would do it again, despite the challenges involved.

I learned a number of “lessons” from the experience of long-distance touring as part of a duo:
First, in order to be “successful”, when you consider becoming part of a group, whether a duo, trio or greater, you should bring musical skills that contrast and “fill in” the recesses of the other partners in the endeavor. For example, the musical backgrounds of Diane and I could not have been more different. She was classically trained at Juilliard to play violin and has perfect pitch, allowing her to sight read standard notation sheet music better than I can. Although I received an excellent musical education both early in life and at college, I am generally self-taught on the guitar but generally have a better ear for chord changes and harmonic structure than Diane in songwriting. Importantly, I can improvise and anticipate chord changes “on the fly” without reference to sheet music based on the musical structure I hear. As a result, our strengths fill in for each other’s musical weaknesses.
Second, each person in the group needs to compromise so as to “strike a balance” on matters of both personality and music in order to be successful. Diane and I have very different personalities. But in order to have a “successful” musical touring relationship, each of us must be willing to compromise on the way in which we do things. I have had to remember to “play nice with others” when performing as a duo with Diane, so that we both can produce a musical experience for our audience whose “whole” is synergistically “greater than the sum of it’s parts”.
Third, time and distance are implacable realities on tour. It was, by far, much harder on both of us traveling from venue to venue than it was actually performing on stage. “Road fatigue” is a very real consideration and sufficient time to get from place to place is extremely important so that you aren’t forced to perform while you are exhausted, or worse, made ill. Therefore, it seems to me that it is imperative to cluster a series of gigs in a general route of travel both coming and going from your start point.

For me, doing “long-distance” gigging was a genuine learning experience. I had always believed that musical artists would not be able to “draw” outside their own well-trod stomping grounds. But what I learned is that the fact that you come from a place relatively far away creates a certain “novelty” that allows you to draw larger numbers that you would otherwise expect. I believe (this is my theory) that the essential part of making a successful foray into a new area is to try and use “house concerts” and “listening rooms” that have a more intimate setting. Because of the expectation of intimate surroundings by the audience, people are much more likely to attend because it creates an aura of “specialness” if you will.
Yours in DADGAD,
Rick Gottlieb